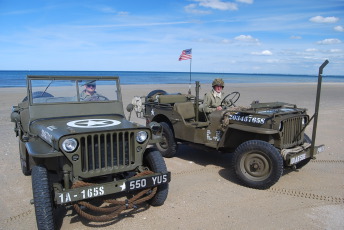 Captured in the book “Band of Brothers” by Stephen E. Ambrose and in the HBO TV mini-series of the same name, the Screaming Eagles Living History Group seeks to keep alive the memory of Company E, 506th Parachute Infantry Regiment of the 101st Airborne Division by re-enacting events from World War Two.

Using period equipment and tents to encapsulate their time both in and out of combat we create period displays and will often eat drink and sleep on display too. The group are licensed to use weapons in battle re-enactments at larger shows and own approximately eight jeeps which all helps add to the authenticity.

We attend many events throughout the UK, for example Tankfest, War and Peace, Military Odyssey and The Flying Legends at Imperial War Museum, Duxford The Group has also attended events in Holland, Belgium and each year members take  part in the annual Normandy celebrations in June at historic places such as Utah beach & St. Mere Eglise.  Some of our members have even taken part in parachute jumps in to the historic battlefields of Normandy and Holland, from period aircraft, using similar parachutes as used in WW2.

Our members come from all over the country and we actively recruit new members. If you want to get out in the open air and have a laugh as well as gain some good mates, get a little fitter, travel to some great locations, take part and handle some amazing equipment and just put a smile on your face then come and join The Screaming Eagles Living History Group.