Use the following links to navigate our Information pages:- 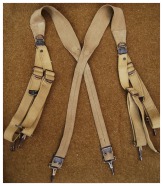 Designated, "Suspenders, Belt, M-1936", the US Army M1936 Suspenders where the standard combat suspenders used in World War II. The suspenders were clipped onto the M36 Pistol belts, BAR belts and the Garand belts to help support them when fully loaded with kit and ammunition. They also have a pair of metal D rings on the front of the shoulders to clip theM1936 musette bag on.

The M36 suspenders were worn by Airborne troops and anyone not using the M1928 Doughboy pack from all the other branches of services including the Infantry, Engineers and Armoured troops. 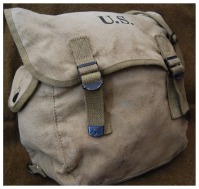 Officially designated "Bag, Canvas, Field, M1936". The M1936 musette bag was a popular alternative to the M1928 haversack and was regularly used by the US airborne to carry personal equipment in the field. The M1936 Musette bag was either clipped onto the back of the M1936 suspenders and worn as a rucksack or worn as a shoulder bag if the extra shoulder strap was used.

Officially called the "Belt, Cartridge, Cal .30, M-1923, Dismounted". This was issued to all soldiers including Paratroopers, Infantry, Armoured. Basically if you had a Garand rifle this is the webbing belt you would wear for your webbing set. Each pocket on the M1923 Garand belt holds 8 rounds in a clip, so the cartridge belt will hold 10 x 8 rounds in clips. 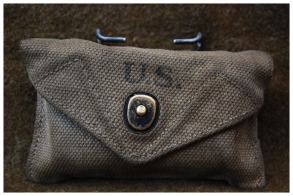 Commonly used to carry a US Army Carlisle bandage, named from the Carlisle Barracks Military Reservation where it was designed. Originally the Small, First-Aid Dressing, was contained in a rectangular tuck-end carton, printed with the required markings, and dipped in wax to make it water resistant and then later placed inside a container made from tin. 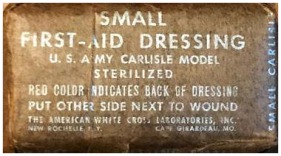 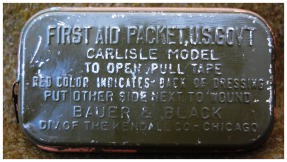 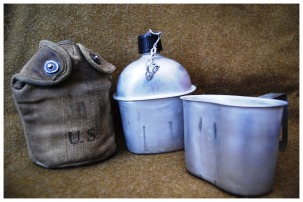 The M1910 Canteen Cup was part of the set of components that made up the M1910 aluminium canteen set. The canteen cup has the same cross-section shape as the canteen body, but is a little larger so the canteen can slide into the cup. The cup also featured a foldable handle, secured by a sliding latch and the handle had two slots cut in it which could be engaged by an M-1926 Fork if the cup handle itself was too hot. The M-1910 aluminium cup had a rolled edge on top, a problem since it got too hot. The 1910 cup and canteen would be stowed in the carrier you can see here and would then normally be attached to the paratroopers belt as part of their webbing. 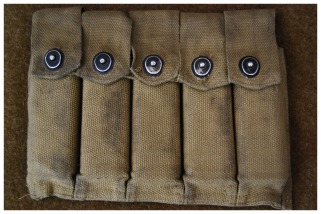 5 pocket pouch for the 20 round Thompson box magazine. This would normally be attached to the M1936 pistol belt.

Pistol belt used in WW2 by all branches of the US Army. It was used by anyone not armed with the Garand or the B.A.R. which had their own belt variant. There are three rows of eyelet's, the top row is to attach the M36 suspenders, the middle row allows the belt to be adjusted in size (the hook on the back of the belt clips into these) and the bottom row allows pistol holsters and first aid pouches etc. to be attached. 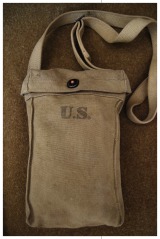 These bags were used primarily to carry the larger 30 round box magazines for the Thompson sub machine gun and supplemented the 5 mag pouch that held the 20 round mags. In addition to or in place of the 30 round mags the bag could be used to carry any other type of ammunition or grenades. 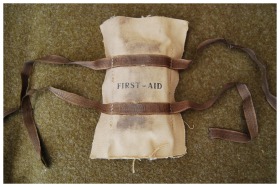 This was an extra first aid kit issued to all assault troops in battles such as the D-Day landings, and contained a bandage, morphine and a tourniquet.

These are associated in the main with the airborne units of the 101st & 82nd and can be frequently seen attached to either the webbing or helmet nets. 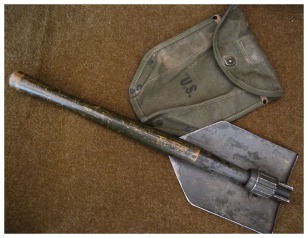 The 1943 model entrenching tool was issued to replace the solid one piece M1928 Entrenching tool. The improved M1943 centred on a folding blade affixed to a hilt riveted to the handle. An aluminium nut locked the curved blade in place, either at a 180-degree angle for use as a spade or at a 90-degree angle for use as a pick or hoe. The tool then folded back 180 degrees on itself so it could be slid inot the etool cover and easily carried on the belt. 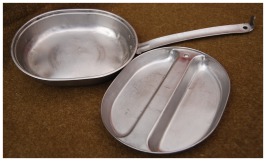 Made of stainless steel and were divided into a pan-and-body system. When opened, the mess kit consisted of two halves: the deeper half forms a shallow, flat-bottom, designed to receive the Meat Ration, and with its folding handle extended, can double as a crude skillet. The Mess Kit Plate (lid) is even more shallow, and is pressed to form two compartments, with a centre divide wide enough to accommodate the folding handle. The sections would of held for example vegetables in one section and potatoes in the other.  The plate also has a very secure ring that is held in place by friction. 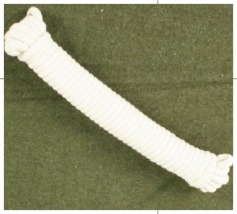 Carried by Airborne troops during WWII and were often seen carried under the musette bag. The rope, 33ft in length, was primarily issued to paratroopers to let themselves down should their parachutes become tangled in tree branches but could be put to use for any other suitable scenarios i.e. lifting guns or equipment to elevated positions. 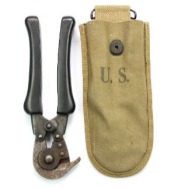 Would be hung from the bottom eyelets of the pistol, garand or B.A.R. belt. Nothing more to say, they’re wire cutters! 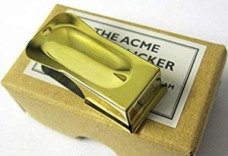 Only the 101st Airborne Division was equipped with crickets, and these were issued to them only a few days before June 6, 1944. The manufacturer was a British company called J Hudson based in Birmingham with the brand “The ACME”. To aid with communication after the d-day drop paratroopers decided that they needed a device that would make a noise that was not too obvious to draw attention but distinctive enough for other US paratroopers to hear and know that a friendly was nearby.

In addition to this a means of recognition, a voice sign/countersign code was developed. The challenge/sign was "flash", the password "thunder", and the countersign (to challenge the person giving the first code word) "Welcome".